While there was no agreement on any substantive outcomes at the summit, the resultant Panmunjom Declaration for Peace, Prosperity and Unification of the Korean Peninsula established a foundation for further inter-Korean engagement and set the scene for the upcoming summit between the US and North Korea.

There has been much media conjecture over what exactly the two parties have agreed to at the Panmunjom summit. It is therefore worth examining the declaration article-by-article to ascertain what is and isn’t on the table.

Read more:
As North Korea builds a season of summits, the stakes on denuclearisation remain high

The Panmunjom Agreement is built around three core articles that identify points of agreement between the two parties, address potential local-level security flashpoints, and call for the negotiation of a treaty to formally conclude the Korean War.

Much of what has been agreed to here is not new, having been restated from previous inter-Korean agreements. However, in the context of the heightened tension that has surround the Korean Peninsula over the past year, this material takes on fresh meaning. 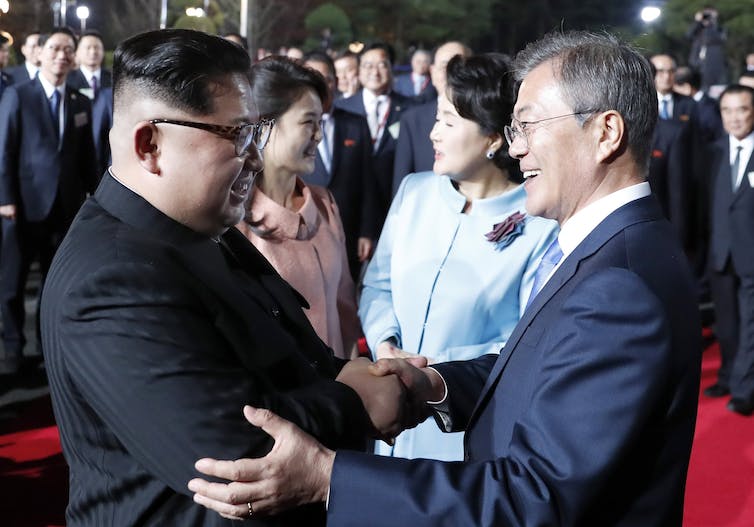 There was much public goodwill at the meeting, but there is much yet to be resolved.
AAP/ Korea summit press pool

The clauses of Article 1 build on existing points of agreement between South Korea and the DPRK that were established during the Sunshine Policy period of the Kim Dae-jung and Roh Moo-hyun presidencies.

In calling on both sides to implement existing inter-Korean agreements, Article I attempts to marshal the authority of the previous agreements as the foundation to legitimise this declaration.

Articles 1.2, 1.3 and 1.4 call for continued South-North dialogue and the establishment of a joint liaison office in Gaeseong: a quasi-embassy to more smoothly facilitate those interactions than is currently possible.

Article 1.5 calls for the restarting of the family reunion program to reunite family members separated by the Korean War. Family reunions have been a staple confidence-building measures between the two parties, as reunions satisfy a genuine need for the affected families, are good PR and relatively easy to facilitate.

Most intriguingly, Article 1.6 mentions potential work on railway and road corridors across the demilitarised zone (DMZ). This would link not only North and South Korea but also China via the western transportation route from Seoul to Gaeseong and north to Sinuiju, at the Yalu River crossing point.

Establishing infrastructure connections between China and South Korea, through the DPRK, has been a long-held objective dating back to the Tumen River development zone of the early 1990s.

Article 2 of the Panmunjom Declaration signals possible security-related confidence-building measures on issues of ongoing irritation between the two. These are lowest-common-denominator actions that both sides can agree to, and signal a greater commitment to cooperation.

While they are easy-win measures, they also address friction points in the day-to-day management of the demarcation line. Preventing local-level flashpoints is particularly important given the pressurised security environment of the past year, when military confrontation looked like a real possibility.

The cessation of “hostile acts against each other” around and across the demarcation line articulated in Article 2.1 does not mean there will be any demobilisation of military forces on either side. Rather, that pinprick provocations such as propaganda battles by loudspeaker across the DMZ and the floating of leaflets into DPRK territory by balloon will cease. These are easy measures for each side to agree to without compromising their security posture.

Article 2.2 revisits the concept of a maritime peace zone in the West Sea around the Northern Limit Line, flagged previously in the October 2007 joint declaration.

The two most serious flashpoints of actual military engagement over the past decade— the sinking of the South’s naval corvette Cheonan, and the North Korean shelling of Yeonpyeong Island — have occurred in this contested maritime space. If the two Koreas were to stumble into a shooting war by accident, this would be the likely flashpoint.

Article 2.3 calls for military-to-military level engagement. This could potentially keep future flashpoint situations in check, although agreement to talk doesn’t signal much more than a discussion at this front end of the confidence-building process.

A permanent peace regime for the Korean Peninsula

Stating a commitment to a permanent peace treaty to end the Korean War is a feature of previous inter-Korean summit declarations. But in this case, the call has added impetus, as a peace treaty might be the only way forward in an expanded round of engagement that included the United States.

If North Korea refused to relinquish its nuclear weapons, and there is little evidence to suggest otherwise, there is no other goal toward which negotiations between the three parties could focus.

In Article 3.1, the two Koreas have reaffirmed their non-aggression pact from the 1992 Agreement on Reconciliation, Non-Aggression, and Exchanges and Cooperation. While the non-aggression clause has been standard fare in joint declarations since that time, this clause has added resonance in the context of the threats of war emanating from the Trump administration over the past year.

Article 3.2 discusses phased disarmament. However, this relates to conventional forces mobilised against each other, and not to nuclear weapons, with the added caveat that other confidence-building measures have been implemented and that “military tensions” (read “the US threat”) have been alleviated.

Like most of the clauses in the Panmunjom Declaration, the veiled reference to the United States in this article is a good example of the negotiated compromise and coded language of the final text.

Article 3.3 talks to the larger great power context by calling for the participation of the original signatories of the Korean War armistice in negotiating a peace treaty. That objective is complicated by the Republic of Korea not being a signatory to the armistice agreement.

The South was represented by the United States in those negotiations, which acted on behalf of the United Nations forces. South Korea will need to be included as a sovereign signatory to a formal treaty to end the Korean War.

However, this clause does not mean North Korea has committed to denuclearisation as that concept is understood by the Trump administration (CVID, or “complete, verifiable, irreversible denuclearisation”). The North Korean interpretation of a nuclear-free Korea includes the full nuclear weapons relinquishment of the United States as well – something that is obviously not going to fly in Washington.

In stating that “South and North Korea shared the view that the measures being initiated by North Korea [my emphasis] are very meaningful and crucial for the denuclearisation of the Korean Peninsula,” this article looks more like a statement of goodwill to Washington with an eye toward the upcoming US-DPRK summit than a substantive commitment.

It will be interesting to see if Moon Jae-in accepts the invitation in the conclusion of the declaration to visit Pyongyang later in the year. That will depend on the outcome of the meeting between US President Donald Trump and Kim Jong-un.

There is little evidence in the Panmunjom Declaration that the South Koreans have attempted to test the waters for an aggressive American negotiating agenda at the upcoming Trump-Kim summit. There was no statement on specifics like a nuclear weapons freeze or missile testing moratorium. Instead, there seems to be more evidence here of an attempt to firewall the Korean Peninsula against an overly aggressive Trump gambit.

A US-DPRK summit based solely around the US-CVID agenda is doomed for failure, as there are no points of convergence between Washington and Pyongyang. A negotiating agenda that includes a pathway to a formal treaty to end the Korean War has a more realistic chance of progress.

Either way, with the inter-Korean summit concluded, it feels like we are at half time of a hotly contested, high-stakes game of summits in which the second half action is only going to get hotter.