In my preview of the historic US-DPRK summit in Singapore, I asked where Trump and Kim might find lowest common denominator points of agreement to potentially unlock a confidence-building pathway.

That this summit has even taken place at all could be seen as an achievement, given where US-DPRK relations were in 2017. We should therefore be unsurprised that despite Trump’s hype in the lead-up to the event, the common denominators of agreement amounted to promises of a new relationship and little else of substance.

However, it is not so much what is in the joint statement as much as what has been left out that is the big story.

To tease this out, let’s consider the four specific points of agreement articulated in the joint statement released by US President Donald Trump and North Korean Chairman Kim Jong-un at the conclusion of today’s summit.

Read more:
As the shaky US-North Korea summit is set to begin, the parties must search for common interest

In the first article of the agreement, the two parties committed to establishing a “new US-DPRK relations.” What might a new relationship between the two countries look like?

The leader-to-leader summit between the two countries was unprecedented and potentially could represent a tentative first step on the road to rapprochement. Symbolism is the obvious place to begin, given the low base the relationship between these two countries is starting from.

If we jump to article four, both parties have committed to the process of recovering the remains of UN forces prisoners of war and soldiers missing-in-action from the Korean War, along with the immediate repatriation of the remains of those already identified.

In a similar way to the family reunion program articulated in the inter-Korean Panmunjom Agreement, the repatriation of POW/MIA remains is a relatively easy confidence-building measure on which to base a longer-term pathway of more substantive measures. It is also of great importance as a mark of respect to the families of those military personnel who can find closure with the return of their deceased loved ones.

The second article refers to joint efforts “to build a lasting and stable peace regime on the Korean Peninsula.” As I’ve argued previously, a settlement to formally conclude the Korean War could be potential common interest around which to develop an engagement pathway.

Prior to the summit, Trump hinted that the “signing of a document” to close hostilities was a possibility. The closest the joint statement comes to this is a passage in the second paragraph, which reads:

“President Trump committed to provide security guarantees to the DPRK.”

It is not immediately clear from the text what these security guarantees might be, but it certainly falls short of any kind of non-aggression pact or peace treaty. Such an outcome was always unlikely at this summit and would be the product of a longer negotiating process should it come to pass. 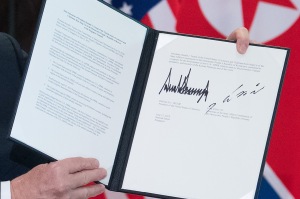 President Trump holding up his signed copy of the US-DPRK joint statement at the signing ceremony.

The joint statement gets interesting in article three, in which “the DPRK commits to work toward the complete denuclearisation of the Korean Peninsula.”

The wording around “complete denuclearisation of the Korean Peninsula” reflects the North Korean interpretation of the concept, which has been well-documented in the lead-up to the summit.

Tellingly, there is no mention of “complete, verifiable, irreversible denuclearisation” (CVID) in the statement text, which is a clear departure from long-standing US policy.

There are a couple of ways this could be interpreted. On the one hand, it is possible that Trump lived up to the pre-summit fears of some domestic critics and gave away too much for too little in the negotiation. From this perspective, the master negotiator Trump was played by Kim into signing off on the North Korean position, through which Kim gets international legitimacy and domestic prestige from attending the summit without having to make any concessions.

On the other hand, Trump’s omission of CVID could be a calibrated strategy accompanied by a clearly articulated and wide-ranging engagement strategy, scaffolded around a formal peace treaty. If so, it could prove to be the circuit-breaker that opens the pathway toward the aforementioned “new US-DPRK relations” and the collective management of North Korea as a nuclear power.

Either way, this will become clearer if and when follow-up negotiations take place. Either way, there are factions of the international political spectrum who will be unhappy with the outcome.

It is significant that article three pays homage to the Panmunjom Agreement, which may be the key to understanding how the US-South Korea-DPRK engagement triangle may unfold.

The Panmunjom Agreement, for all its ambiguity, does have an articulation of economic and security confidence-building measures, based on a shared vision for a permanent Korean Peninsula peace regime.

If we assume a calibrated strategy in deferring to the Panmunjom Agreement, the US-DPRK joint statement may indicate the bulk of the heavy lifting with regard to confidence-building measures will be handled as an inter-Korean affair, with Trump’s apparent non-aggression promise providing space for engagement initiatives to evolve.

My take-home message from the omission of CVID from the joint statement is confirmation that North Korea under Kim Jong-un is never going to willingly denuclearise.

In “working toward complete denuclearisation,” North Korea may agree to a nuclear weapons and ballistic missile testing moratorium, decommission obsolete nuclear facilities, or even promise to freeze production of new nuclear weapons, without ever having to compromise its nuclear weapons capability.

Read more:
If a US-North Korea summit does happen, we’ll have Moon Jae-in to thank for it


We should not be surprised if one or both parties back-pedals from the joint statement at some stage. Seasoned North Korea watchers will be expecting North Korea to backtrack from the joint statement to extract concessions, or add new conditions to their continued commitment to the “new US-DPRK relations,” as we have seen several times previously.

We are also likely to see Trump sustain considerable political heat domestically for his perceived capitulation on CVID and for omitting human rights from the discussion, as well as from the Japanese government for selling out their security interests.

This pressure may be sufficient to prompt a recalibration of the US interpretation of the joint statement. Backpedalling from either side will change the position of the other and blow the whole engagement process out of the water.

The final paragraph of the joint statement commits US Secretary of State Mike Pompeo to meet with an as yet unidentified high level North Korean official. It will be at these meetings and beyond where the “new US-DPRK relations” will start to take shape.