Overnight North Korea conducted its third nuclear weapons test. The test came in the wake of a successful long-range rocket launch in December and resulting condemnation from the United Nations Security Council via UNSC Resolution 2087.

This latest development raises two obvious questions: Why did North Korea conduct the test, and how might the international community react? 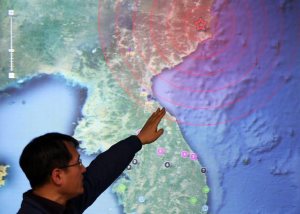 A quake official at the Korea Meteorological Agency (KMA) in Seoul points to North Korea’s northeastern county of Kilju, where the communist country apparently conducted a nuclear test on 12 February 2013.

The seismic signature of this blast registered 4.9 on the Richter scale, larger than a reading of 4.52 from a similar explosion in 2009.

There are several ways of interpreting the larger yield of the most recent blast.

It could have been a bigger bomb, ergo the larger explosion. This seems unlikely given Pyongyang’s need for a miniaturised weapon to demonstrate its deterrent capability.

It may have been North Korea’s first test of a uranium-based weapon using fissile material from Pyongyang’s advanced High Enriched Uranium (HEU) program. Uranium-based nuclear devices are more technologically sophisticated than plutonium bombs, but the uranium feedstock does not have to pass through the numerous processes of the nuclear fuel cycle to be weaponised. HEU installations are more efficient in producing fissile material and harder to detect because they bypass the reactor burn process, hence their appeal.

Or the test may have been of a smaller device packing a stronger punch. Miniaturisation is the next technological milestone for the North’s nuclear scientists in order to produce a nuclear warhead that is deliverable atop a missile. To confirm itself as a nuclear weapons power, North Korea must demonstrate it has developed a deployable nuclear device. A nuclear bomb has no deterrence value unless it can be reliably and accurately delivered to an enemy target.

After every North Korean provocation, journalists and colleagues usually ask me how the international community is likely to react.

The international reaction is the most predictable variable in the equation. The answer is: more sanctions.

Why sanctions? Military force is essentially off the table. A casual glance at a map of the Korean peninsula will show that Seoul is essentially indefensible against North Korean rockets and artillery due to its close proximity to the Demilitarized Zone (DMZ).

The estimated cost of war and reunification should an American military action escalate to full-scale war is estimated in the trillions of dollars and millions of lives, borne largely by South Korea. For any rational military strategist, the risks of an armed response to North Korea’s pin-prick provocations are prohibitive.

China fears the potential for economic and social dislocation in its northeastern provinces cause by large refugee flows from North Korea in the event of war or state collapse.

Despite its stern rhetoric, the expansion of sanctions in UNSC 2087 was relatively mild. It placed travel bans and asset freezes on four officials and six state-owned enterprises from the North Korean space program and Pyongyang’s amorphous network of foreign exchange banks and dummy companies. This network exists to subvert international sanctions and fund North Korea’s nuclear and missile proliferation activities.

The sanctions regime has been largely ineffective in controlling North Korea’s nuclear and missile proliferation activities. There is a limit to the number of individuals and state-owned entities in North Korea that can be targeted for sanctions. One would therefore expect a new round of sanctions to include a crackdown on foreign entities thought to be assisting North Korean sanction-busting.

A stronger sanctions regime also requires cooperation from Beijing, as China is the country with the greatest economic leverage over the DPRK. Chinese foreign policy elites have been engaged in intense debate over the appropriate approach to North Korea for some time, however it is likely that the official policy of restrained disapproval will continue to carry the day.

The inability to prevent North Korea testing a nuclear device is evidence of its weak leverage over Pyongyang. Indeed it is the international community’s weak hand that creates the strategic space for relatively scot-free North Korean provocations.

North Korea is a determined nuclear weapons and ballistic missile proliferator, driven by a number of economic, strategic, political and bureaucratic motivations all linked to the regime’s over-arching goal of survival.

The successful test sends a powerful strategic signal that North Korea is serious about expanding its nuclear arsenal.

Benjamin Habib does not work for, consult to, own shares in or receive funding from any company or organisation that would benefit from this article, and has no relevant affiliations.