In this guest lecture for the first-year undergraduate subject States, Security and International Relations at La Trobe University, I expand on my Conceptual Introduction to Weapons of Mass Destruction lecture to focus on North Korea as a WMD case study.  North Korea’s nuclear programme is highly important to the political economy of the DPRK state and the perpetuation of the Kim regime.  The development of North Korea’s nuclear programme has been a long-term project spanning several decades.  North Korea has compelling strategic reasons to maintain a nuclear deterrent, surrounded as it is by great powers amidst a half-century of uneasy truce with the United States and South Korea.  Denuclearisation negotiations have followed a cyclical pattern in which the North has provoked crises to make new demands and gain leverage in negotiations. By inference, it is clear that the nuclear programme has great intrinsic value to Pyongyang. This paper argues that the nuclear programme has value as a bargaining chip in international diplomacy to extract economic inputs for its moribund economy, in domestic politics as vehicle for bureaucratic interests and as a rallying symbol of the country’s hyper-nationalist ideology, as well as its role as a defensive deterrent and important cog in Pyongyang’s offensive asymmetric war strategy.

Thank you to States, Security and International Relations subject coordinator Dr Daniel Bray for the invitation to present this lecture and to the student group for their warm reception. 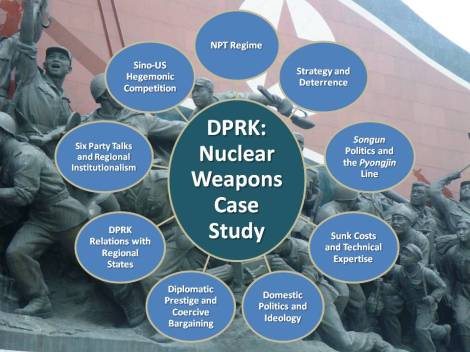