On Wednesday 1st July 2015, I delivered a guest lecture entitled “North Korea, Climate Change and Capacity-Building” to students completing a Design Research Studio in the Master of Landscape program at the Royal Melbourne Institute of Technology (RMIT).  The students studio project focuses on the question What If The DMZ Became a…? Imagining the Impossible, in which they are interrogating the political role of landscape architecture in larger discourses on borders.

When we think of North Korea, we think of a nation determined to be an outsider in the international community. Whether it’s testing nuclear weapons or violating human rights norms, the Democratic People’s Republic is rarely associated with international cooperation. However there is compelling evidence that the North Korean government is motivated by domestic power consolidation imperatives to co-operate globally on climate change. The most obvious link is between environmental degradation, the North’s vulnerable agricultural and energy systems, and the stability of governance in North Korea.

Thank you to studio leader Dongsei Kim for the invitation to present to his student group.  There is significant overlap between my work on the climate change-governance nexus in North Korea and Dongsei’s research into understanding how borders and their territories can influence the way designers construct inclusion and exclusion in urbanism, particularly in the context of the DMZ on the Korean Peninsula.  It was a pleasure to engage in some cross-disciplinary collaboration with Dongsei and his class.  Thank you also to the studio participants for their insightful questions and enthusiastic participation. 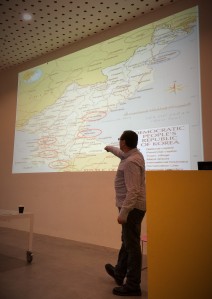 Ben Habib. ‘Pangapsumnida! Inside the Democratic People’s Republic of Korea‘.