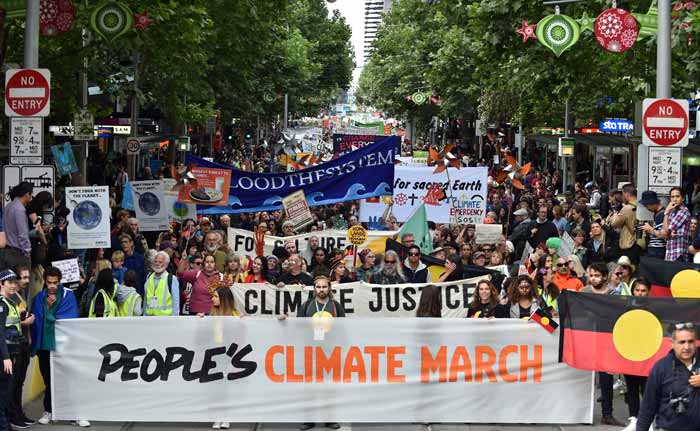 On Friday 27th November I joined 60,000 other concerned citizens in Melbourne for the People’s Climate March, the first of a number of networked actions which took place around the world in the lead-up to the twenty-first conference of parties (COP-21) for the UN Framework Convention on Climate Change (UNFCCC) in Paris.

The march was notable for its diversity.  Over 300 NGOs and community organisations took part in the event, along with individual participants from across Melbourne and regional Victoria.  The march was also notable for the lack of coverage it received in the media, overshadowed by other momentous news items such as the use of a pink cricket ball.  Nonetheless, the atmosphere among the marchers was electric and it was immensely reaffirming to be surrounded by so many committed people, as I have attempted to show in my short video commemorating the event…

It is easy to forget during our everyday struggles, especially through the toxic environment of climate politics in Australia over the past several years, that the climate movement is a large and diverse constituency networked across local, state, national and global levels.  That size and diversity is politically important in the context of COP-21 in Paris.  The politics of the UNFCCC negotiations can be conceived of as a two-level game, where national policy makers are required to make decisions that will satisfy both domestic and international objectives and audiences.

At the national level, domestic groups pursue their interests by pressuring the government to adopt favourable policies, and politicians seek power by constructing coalitions among those groups.  The domestic dimension of the two-level game is complicated by the personalities and worldviews of political leaders, political and bureaucratic processes, public pressure, and the structure of national economies.  At the international level, national governments seek to maximize benefits in line with the preferences of key domestic constituents, while minimizing the adverse consequences of foreign developments.  To execute a successful negotiation, negotiators can only promise or concede as much as their domestic constituents will allow.  The purpose of the People’s Climate March was to demonstrate to delegates at COP21 in Paris, through the logic of numbers, that there is a large constituency which supports stronger action.  That the march was networked with similar protest actions across Australia and around the world over the past weekend demonstrated the emerging political power of the climate movement.

The UNFCCC is a framework of soft law non-binding commitments and guiding principles, with the long-term objective of solidifying emissions reduction commitments into binding hard law.  Under the Convention, governments agreed to collect and disseminate information on greenhouse gas emissions, national policies and best practices, launch national emissions abatement strategies, and cooperate in preparing for adaptation to climate change impacts.  The Convention divides signatory countries into three main groups: First come the Annex I Parties, which include the industrialized countries that were members of the OECD in 1992, plus countries of the former Soviet Union designated as “economies in transition.”  Second come the Annex II Parties, comprising the OECD members of Annex I, but not the economies in transition’ countries.  The third group are the Non-Annex I Parties, which are mostly developing countries or countries recognized as being especially vulnerable to adverse climate impacts.  Annex II parties are required to assist Non-Annex I and economy-in-transition countries with financial and technological resources to undertake emissions reduction activities and adapt to adverse climate impacts.  This division enshrined the concept of common but differentiated responsibilities, which is enshrined in Article 3.1 of the Convention.

The Annexes reflect the geopolitical and economic landscape of the early-1990s and have become outdated for the realities of 2015, given the economic rise of China and to a lesser extent India, along with the relative decline of the United States.  Under the UNFCCC’s Kyoto Protocol, most Annex I countries agreed to emissions reductions in the range of 6-8% below 1990 levels, during the first emissions budget period from 2008–2012.  It was left to individual countries to choose their own method for achieving their targets.  Non-Annex I countries took on no obligations under the Kyoto Protocol.  The primary hope leading into COP-21 is that participating states can negotiate a single, legally binding agreement to be implemented by 2020, covering all major carbon pollution emitters including China, India and the United States, thus creating binding emissions reduction targets for all parties to the UNFCCC, not just the Annex I states.

Where developing countries are concerned with justice and historic responsibility in articulating responsibilities under the Convention, developed countries are generally more concerned with preservation of economic competitiveness.  The hard law/soft law debate surrounding emissions reduction targets and the discussion around financial assistance through the Green Climate Fund, among a number of disagreements within the UNFCCC negotiations, is rooted in different interpretations of the doctrine of common but differentiated responsibilities between developed (e.g. the US and Australia), newly-developed (e.g. China and India) and developing countries (e.g. AOSIS states, LDCs).  For these reasons COP-21 is shaping up as one of the most important diplomatic meetings of the last hundred years, hence the importance of the civil society participation of the global climate movement in attempting to influence its outcome.

Despite the powerful numerical demonstration of the size of the climate movement over the past weekend, marches alone will not be sufficient as a grassroots political intervention in international climate politics.  Protest actions need to be accompanied simultaneously by other interventions that increase the sources of political leverage of the climate movement and help to establish the foundation of a regenerative socio-economic system that can repair the damage of climate change and related ecological degradation.

A regenerative practice for our time starts with a change in consciousness.  As a foundation, our regenerative project needs to recognise our inter-dependence with each other and with the natural world.  It should mitigate the causes and respond adaptively to climate change.  It should involve not only acts of omission, commission and protest, such as the People’s Climate March, but also active construction of viable new economic and social systems.  It should send tangible political, social and market signals to existing institutions and give its practitioners leverage in relation to these structures.  It should undercut the material and political power of the vested interests in the old economy that are driving ecological degradation.  It should draw on the insights and experience of other social justice movements through networked interaction, creating a momentum for justice across all segments of our society.  It should establish a practical model of right living and in so doing, demonstrate a constituency for change for others to adopt and political institutions to react to.  It should be the embodiment of Gandhi’s dictum “be the change you want to see in the world.”  Naomi Klein explores this in her new book This Changes Everything: Capitalism vs. The Climate…

If the opposition movements are to do more than burn bright and burn out, they will need a comprehensive vision for what should emerge in the place of our failing system, as well as serious political strategies for how to achieve these goals.

A holistic regenerative politics of this kind creates more leverage points to exert political pressure on governments to take bolder positions in international multilateral forums like the UN Framework Convention on Climate Change and gives them room to manoeuvre in their negotiations with other countries.  Similarly, the demonstration effect can work to influence people in other countries through a networked contagion, creating the same pressure for bolder action among several negotiating parties.

The implications of the two-level game of international negotiations for us as concerned citizens are clear.  We need to maximise pressure on our governments to adopt strong emissions reduction targets while simultaneously minimising the relative power of recalcitrant sectional interests over the policy-making process.  As stated above, national negotiating teams can only go as far as their domestic constituencies allow.  Altering the balance of power among domestic constituents is pivotal to altering the balance of possibilities in the UNFCCC process.

Congratulations to everyone who attended People’s Climate Marches in Melbourne and beyond over the weekend.  We achieved a great deal in demonstrating a constituency for strong climate action, but we still have a lot more work to do.