In 2005 China was home to 16 of the 20 most polluted cities in the world, but today it is the world’s leading producer of renewable energy sources.  It has the largest capacity solar, wind and hydro plants in the world, accounting for one-third of installed wind power, and one-fifth of installed solar.  It is now poised to step into a leadership role in global climate politics, and is well placed to be the dominant player in the post-carbon international economy. 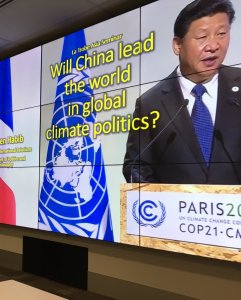 In this week’s edition of the La Trobe Asia seminar series, Dr Benjamin Habib from the LTU Department of Politics and Philosophy argues that China has become the global leader in international climate politics, on the basis of intersecting forces including domestic political imperatives to address environmental pollution, its leading role in the green technology sector, the accelerating decarbonisation of energy systems globally, the carbon bubble and its impact on investment finance, and the emergence of a carbon pricing bloc among G20 countries. On this basis, he argues that as the international economy transitions beyond fossil fuels, China is in pole position to shape the contours of this emerging post-carbon global economy.

This presentation was inspired by the article “China set to lead of global climate politics” co-authored by myself and Nicholas Procter, published in February 2017 in Asian Currents.

Thank you to the La Trobe Asia team for the invitation to present in the seminar series.