From 2nd-12th December 2017 I co-facilitated a CERES Global tour to India, themed around sustainable development, permanent culture and un-learning.  My focus for the tour was to collect data for my research project on permaculture as a transnational social movement and to learn more about alternative education models as a teaching and learning professional development immersion.  This posting is one of a series of my daily reflections from the tour on what our group encountered.

On day three of our CERES Global Sustainable Development, Permanent Culture and Un-learning tour to India, our guides from Shikshantar—Vishal, Manish and Nishtha—led us on a fascinating journey through the old city of Udaipur.  The winding alleyways, bustling markets, colourful buildings and diverse people, are collectively woven together in a rich tapestry of stories and history.  On foot is the best way to experience the richness of these stories and notice things you never would have time to see transiting via faster modes of transportation.

Our walk through the old city of Udaipur was framed by our hosts not just as a walking tour but as a “wisdom walk,” as a way of learning about and engaging with Udaipur as a living, dynamic entity.  I have written previously about the treasure trove of information about the history, politics, economics, culture and ecology of place that can be obtained through reading landscapes.  So it was with great excitement that I set off on foot with my CERES Global tour group friends for a stroll through the old city of Udaipur.

There are a few conceptual influences on landscape reading that when practiced can turn a walk into a “wisdom walk.”  The first conceptual influence is the discipline of political geography, which is concerned with the multiple intersections of geography, politics and government policy.[1]  Landscapes—urban built environments, rural agricultural settings and wilderness areas—can be a rich source of information about the political economy and culture of the country.

Political ecology is the second key conceptual influence, examining the intersection between political economy and environmental issues, particularly in the developing world.  It explores the influence of human economies and power structures over the ways in which different people interact with and are allowed access to resources from ecological systems.[3]  The observation of people and how they relate to their environments is the critical skill here.

The wisdom of the old city

Famous as India’s “city of lakes,” Udaipur was founded by Maharana Udai Singh of Mewar dynasty in 1553.  The architecture and monarchic culture of the Mewars has given Udaipur a distinctive feel and it is this culture that is marketed to tourists of the city.  More interesting to our group was the culture of the street.  At a group of shops selling hand-made brooms and baskets, we discovered that craftspeople manufacture dozens of different kinds of brooms, made from different materials, for different cleaning and sanitation purposes.  We met with the last remaining weavers of hand-made banana leaf bowls, who made the bowls for our lunchtime meal.  We encountered a small cotton weaver’s shop, complete with early-2oth century mechanical cotton gin.  We came across street spirituality in all manner of small and large temples, devoted to diverse gods from the Hindu pantheon.

The old city is full of small shops and markets, selling everything from spices, pulses and fresh produce to clothes, domestic implements and mobile phones.  It was explained to us that the market for consumable goods is large enough to provide all of the small traders with a living and through this system many people are able to earn a livelihood.  Relationship-building is an important part of trade in this system, where sellers and buyers cultivate ongoing relationships for their mutual benefit.  This is in contrast to the oligopoly of large supermarkets that have cornered the market in Australia, based on exploitative relationships with both their suppliers and their employees.

The ecology of the old city was fascinating, with many different animals playing an active role in the streetscape.  At the wet market, goats and sheep patrol the edges eating up scraps that would otherwise lay rotting on the ground.  At night time, the animals move in and clean up the leftover food scraps left by the market sellers, keeping the precinct cleaner than it otherwise would be.  We encountered many cows, sacred in Hindu culture, and saw how people would provide them with food scraps for them to eat.  Of course the proliferation of animals is not without problems.  While they clean up the waste of the human food trade, they also produce waste of their own that is a challenge to street sanitation.

We experienced the chaotic interplay between pre-modern architecture and twenty-first century technology, with narrow alleyways that were designed three centuries ago to accommodate foot traffic now hosting cars, bikes, auto-rickshaws and lorries, in addition to pedestrians.  It was not uncommon to see two vehicles idling in stalemate, unable to move past each other in the narrow streets with traffic back up behind them.  It did strike me as ludicrous that anyone would bother driving a car through the old city, like trying to pilot the Millennium Falcon through the inner cavities of the Death Star (for my fellow Star Wars geeks out there).  Harry Potter fans could easily visualise the old city as Diagon Alley.  It’s easy to see how cities in Asia become exoticised for science fiction and fantasy stories for audiences in the West.

We concluded our walk at the family home of our guide Vishal, whose family historically served in the Mewar court.  We were shown a beautifully ornate room at the top of the building that has hosted Rajasthani and British royalty, among others, in its history as a meeting place for important officials of the Mewar dynasty.

This photo essay documents some of the threads making up the rich tapestry of history, politics, economics, culture and ecology we encountered in the old city of Udaipur… 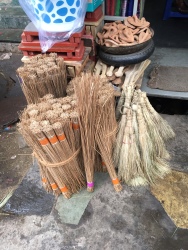 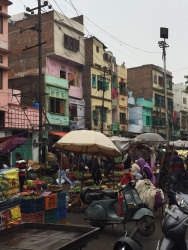 Fresh produce vendors. Notice the monkeys sitting atop the buildings behind. 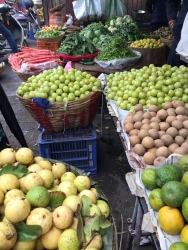 Fresh fruit and vegetables on sale.

Part of the visual feast of architecture that fascinated the group.

Beautiffuly coloured buildings, though not all the buildings in the old city are that old. 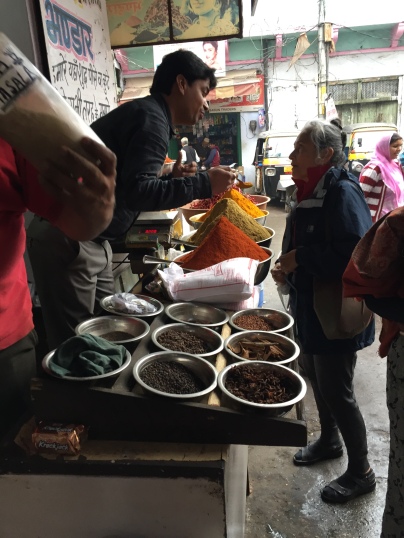 Patricia negotiates to buy some spices. 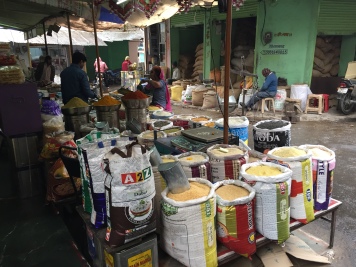 Grains and pulses on sale, the food staples. 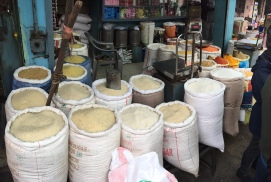 A goat on the street. Goats are the ultimate omnivores.

Fresh produce on sale at the wet market. 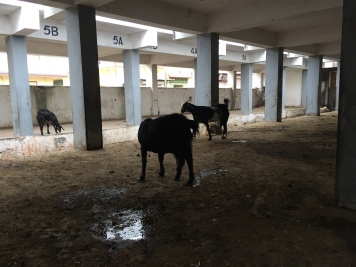 Goats cleaning up scraps at the wet market.

Making fried snacks from dal flour. Yes, they were tasty! 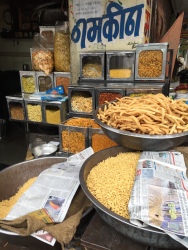 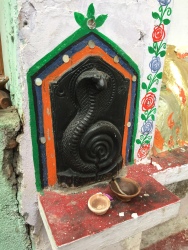 Small temple to Lord Shiva on a street wall. 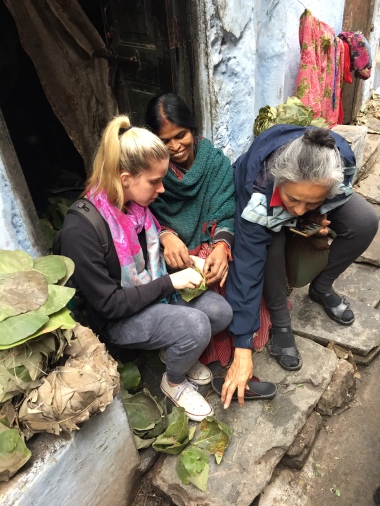 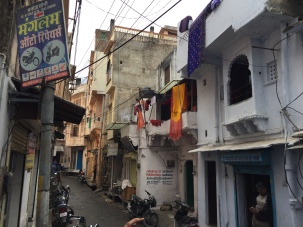 The separation between domestic life and the street is much finer than in suburban Australia. 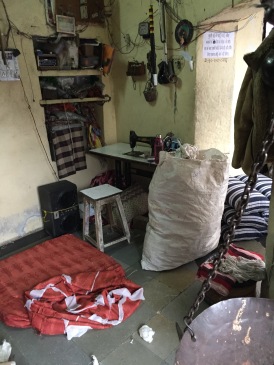 Engrossed in the history of Vishal’s family home.

[2] Atkins, P. (1993). The Dialectics of Environment and Culture: Kimilsungism and the North Korean Landscape. Environment and Development: Views from the East and the West. A. Mukherjee and V. Agnihotri. New Delhi, Concept: 309-332, Atkins, P. (1996). A Séance With the Living: The Intelligibility of the North Korean Landscape. North Korea in the New World Order. H. Smith, C. Rhodes and D. Pritchard. New York, St. Martin’s Press: 196-211.

*The views expressed in this posting are my own and don’t reflect the institutional position of CERES Global or La Trobe University.