I wrote the following article in response to class discussions that arose in my 3rd-year undergraduate subject Issues in World Politics (POL3IPP).  This subject has been structured around inquiry-based learning, centred on a curriculum design project, where students chose international relations topic for the subject syllabus.  Students then arranged themselves into groups, where each group took responsibility for designing a presentation and class activity on one of those topics.

To foster an active community of practice within the class, students were also asked to write a weekly reflection on each topic, providing constructive critical feedback on the conceptual content and method of delivery of each presentation.  The curriculum design project was scaffolded by in-class workshops on strategies for collaborative group work, effective political communication, approaches to pedagogical content knowledge, and the art of providing constructive critical feedback.

I wrote the article below as a reflection on a spirited class discussion which arose around colonialism and race-based power structures.

The topics we’ve chosen for our curriculum this semester offer many entry points into the structures and distribution of power.  Developing a functional literacy of power is an important graduate outcome for the Bachelor of International Relations program.

The classical liberal presupposition tells us that people are atomised individuals interacting contractually as rational self-interested actors.  However, I subscribe to the view that people, the institutions and social structures we create, and the natural environment exist in a state of complex inter-connection (drawing from theories of complex systems).  Thus, in any interaction between people, there are implicit and explicit power relations at play that are shaped by those social structures.

Next time you’re in class, look at the people around you.  Your relationship with every person you see is mediated by an intersecting set of power hierarchies, based on variables including ethnicity, gender, class, sexual orientation, age, education level, where you live etc.  These power hierarchies advantage some people while disadvantaging others, in the process concentrating political, economic and social power.  For example, as philosopher Charles W. Mills has compellingly argued in his critique of social contract theory, racial power hierarchies are structural, shaped by political institutions, economic systems, social practices and cultural norms.

Although they are deeply rooted in history, there is nothing “natural” about these hierarchies, they are dynamic and changeable.  In other words, institutional arrangements allow power structures to manifest as a collective act of discrimination.  Where a person’s social position is affected positively from discriminatory power structures, this could be considered privilege.

As you look around at your peers, think about how these dimensions of power shape your relationships with these people.  The greater your level of privilege, the less likely it is you may have noticed that privilege because you may have never been unfairly disadvantaged on the basis of your race, gender, class, sexual orientation, age, education level, as so on.  As my colleague Yassir Morsi has argued, this is the cognitive comfort that comes with power.

Having your privilege pointed out can be a discomforting experience, however that discomfort is something that people with privilege need to process and move beyond.  I understand this discomfort, as a white, middle-class, heterosexual, able-bodied, highly-educated male from an affluent country, this is something that I have had to work through across a number of professional environments and life situations.  Continuing to go through this process, I don’t see it as confronting to think critically and reflectively about my level of privilege and what that means for the interactions I have with others as a professional, as a citizen and as a person.  I see it as an important self-exploration and encourage you to similarly think critically and reflectively about where you sit within this matrix of power.

On the other hand, not thinking reflectively about privilege is problematic.  Not dealing with privilege means we will inevitably recreate environments that replicate disempowerment and are not safe for many members of our communities.  This is where we need to employ our empathic thinking skills.  The discomfort of having privilege called out is trivial in comparison to the daily indignities, humiliations and disempowerments faced by people who are less privileged across these power hierarchies.

I strongly recommend reading “How white women use strategic tears to silence women of colour” by Ruby Hamad, which offers an illustrative example of race-based privilege blindness in the feminist movement, along with this Twitter thread by scholar-activist Eric Anthony Grollman on problematic reactions to having privilege called out. I also recommend Robin DiAngelo’s article “White Fragility,” in which she argues that the dominant white society in North America insulates white people from race-based stress and lowers their ability to engage in constructive dialogues around institutional racism.  If you would like to evaluate your relative level of privilege, there are several activities available online to help you figure this out, including this “privilege walk” activity published by educational trainer Darryn Cambridge.

Understanding privilege is an important learning as you build your functional literacy of power, identifying distributions of power and recognising where we sit within a structural spectrum of power and agency.  Being cognisant of power relationships can help us to work toward flattening out these hierarchies, to be an ally and actively pursue ways of mitigating disempowerment, of honouring the diversity of the groups we are a part of, and developing the professional competencies expected of a graduate from an International Relations degree program. 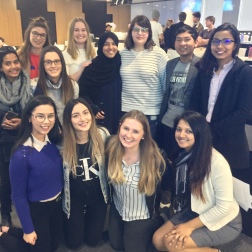 I’d like to take this opportunity to thank my students from the International Relations program at La Trobe University.  I learn just as much from you as you do from me.  You challenge me to be a better intellectual and a better human being.

All constructive feedback is greatly appreciated.

2 thoughts on “Developing a Literacy of Power: Grappling with Privilege”