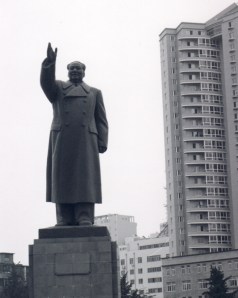 Statue of Mao Zedong in Dandong, Liaoning Province (Taken by the author, July 2004).

The study of history is integral to comprehending the present and glimpsing the future.  Understanding the tragic, epic story of nineteenth and twentieth century China – a period of great violence and upheaval – is vital to understanding the China of today.  It has never been more important for Australia’s young people to learn about China.  Australia is integrated into the Asia-Pacific, a region in which China is one of the most important players and one of Australia’s largest trading partners.  Knowing the history of such an important regional neighbour is a key to successful interaction.

On Thursday March 1st, 2012, braving torrential rain, Victory Lutheran College VCE history students, led by their teacher Logan Hayward came to La Trobe University Albury-Wodonga campus for a workshop presented by myself on Mao Zedong and the Communist Party.  The workshop was a supplement to the students’ VCE History studies on the Chinese revolution.

In my presentation, I discussed the historic context in which Mao Zedong became a pivotal figure, beginning with an outline of China’s decline from the First Opium War through to the fall of the Qing Dynasty in 1912, Yuan Shikai’s early republic, the Warlord Period and the Guomindang asscendency during the first phase of the Chinese civil war, with the Japanese threat looming in the background.  I then talked about Mao the revolutionary, from his rise to prominence during the Long March, and his skills as a strategist and guerrilla leader through the Second Sino-Japanese War and the conclusion of the Chinese Civil War to his proclaimation of the People’s Republic of China on October 1st, 1949.

In the third portion of my presentation, I analysed Mao the national leader.  Despite his triumph in uniting China after a century of chaos, tis attempts to apply the principles of guerrilla warfare to the administration of government in the Great Leap Forward, and his bold strategy to regain his position in the Chinese Communist Party during the Cultural Revolution, caused further socio-economic turmoil and loss of life. 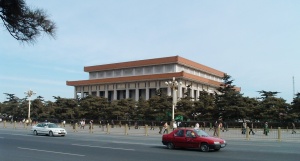 Mao Zedong’s legacy is a complicated one, due to this contrast between Mao the revolutionary and Mao the national administrator.  One of the aims of the workshop was to encourage VLC students to grapple with this legacy.  La Trobe University Bachelor of Arts students Alicia Peters, Lisa Tuck and Martin Dickens led small groups of VLC students in a discussion of the question “Was Mao Zedong, on balance, good or bad for China?”  The aim of the activity was to engage the students in critical thinking, moral questioning and consensus decision-making, with a view to enhancing their understanding of Mao’s impact on China and also to give them a taste of university-style learning.

In addition, the event provided an opportunity for both VLC and LTU students to enjoy learning and take pride in being intelligent.  The workshop provided a great opporunity for VLC students to the sample the university experience and see university study as a meaningful career pathway after high school.  It also provided valuable hands-on experience for LTU Bachelor of Arts students in group leadership and facilitation.

A big thank you goes out to Logan Hayward from VLC for instigating the workshop.  His good work with this student group was evident to me in their solid background knowledge of the subject and their thoughtful contributions during the workshop.  I’d also like to congratulate the VLC students themselves for their enthusiastic participation in what was an immensely enjoyable session.

Dr. Benjamin Habib is a Lecturer in Politics and International Relations at La Trobe University, Albury-Wodonga. Ben’s research project projects include North Korea’s motivations for nuclear proliferation, East Asian security, international politics of climate change, and undergraduate teaching pedagogy. He also teaches in Australian politics and the international relations of the Middle East.  Ben undertook his PhD candidature at Flinders University in Adelaide, Australia, and has worked previously for the Department of Immigration and Citizenship.  He has spent time teaching English in Dandong, China, and has also studied at Keimyung University in Daegu, South Korea.  Ben is involved with local community groups Wodonga and Albury Toward Climate Health (WATCH) and Transition Albury-Wodonga.