In my well-publicised blog post What it feels like to ‘freeze’ on national television, I painstakingly relived the excruciating emotional and physical experience of suffering a panic attack during an interview of live TV. My panic attack on ABC News Breakfast earlier this month was not simply stage fright or a discrete one-off event, but rather was the manifestation of a life-long struggle with anxiety. I was able to talk about my experience so eloquently because my journey into understanding my anxiety and the impact it has had on my life has been a long one and I had reached a stage, even before the interview, where I was ready to start talking about my experiences more openly (though perhaps not quite so publicly).

I would like to thank the many people who have sent me messages of support over the past couple of weeks, who have shared their own experiences, and encouraged me to keep writing about anxiety. These responses from people from many different professional fields, from many different places around Australia and the world, were both humbling and deeply moving. I intend to honour those responses by continuing to write about my experiences with anxiety and depression. Obviously I am not a trained mental health professional so what I am sharing with you is my experience of the anxiety phenomenon, but an experience which I am confident many people can relate to.

In this piece I want to look back at earlier stages of my life where to reflect on how I coped with my anxiety in the days before I properly comprehended what I was going through. I am going to reflect on these periods of my life through my experiences playing basketball, a sport which has been a huge part of my life since I was ten years old. Based on the hundreds of messages I have received since posting What it feels like to ‘freeze’ on national television, I have a feeling the experiences I describe below will resonate with a lot of people.

…and as I stated previously, it is important that we continue to talk honestly and openly about mental health issues, because they are experienced by people everywhere in 2016.

Anxiety as a Kid

My baseline psychological state is a heightened level of situational awareness, a couple of rungs below fight-or-flight but well above what would be considered a normal level of arousal. Because of my heightened baseline anxiety level, I have always felt uneasy in social situations because I am simultaneously intensely tuned in to everything going on around me and processing that sensory information within the rich high-resolution inner world of introvert.

As a kid I found it challenging to figure out how to interact with the world, always flooded with sensory overload and the strong emotional responses that I would have to that sensory input. I felt awkward, looked awkward and from time to time became a target for would-be bullies who have a knack for sniffing out their sensitive peers.

Every so often I would lash out at others, usually in situations where I felt out of control and emotionally maxed out. This would usually land me in trouble and make me feel even worse about myself, because of course I did not understand the roots of my frustrations at the time

Developing a razor-sharp wit was one coping strategy I developed in primary school to deal with my anxiety. Another was to be deliberately naughty to fit in more with my peers. Music was another important escape (which I will write about in a future blog posting). Of course I didn’t consciously develop these coping mechanisms with the cold analytical mind through which I’m describing them now. As a kid, I unconsciously stumbled upon modes of behaviour that seemed to help me feel better in the moment.

The most influential anxiety coping mechanism I stumbled across was the game of basketball. It took a lot of coaxing from my parents to get me to go to the junior coaching clinics that were held every Friday night at the Icehouse Basketball Stadium in Mount Gambier, where I grew up. Before long I was enjoying the sport, was placed into an under-12’s team and even discovered that I wasn’t too bad at it.

In hindsight, basketball was a great anxiety coping mechanism for me because it provided a space that was bounded and discrete in which I could channel all my sensory attention, inner dialogue and emotional focus (in a way, practicing what we would now think of as mindfulness). Basketball provided a welcome place of escape from the awkwardness and uncertainty with which I experienced ordinary life.

As my skills improved and started to experience individual and team success, I began discovering a higher level of self-worth and self-confidence than I had ever felt previously. I played on association representative teams and South Australia Country state teams, won club premierships and had some wonderful individual moments. Perhaps the defining individual moment that help to boost my confidence came when I was thirteen years old, playing in a grand final. Down by one point with five seconds to go in the game, I hit two free throws to win the game in front of a couple of hundred people. This moment gave me the confidence that I could come through when it really mattered, both on and off the court. 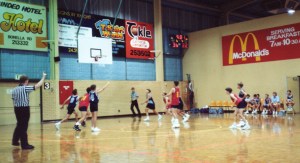 As with any vehicle of escapism, my relief from my anxiety on the basketball court was temporary. Because of my baseline anxiety state, there were many occasions on the court when game situations—referees’ calls, for example—tipped me over the emotional line, causing me to lash out (usually with a string of expletives at referees). My emotional volatility led to numerous technical fouls and even one memorable ejection after which I left the court “mooning” the referees.

The self-esteem I was getting from basketball success began to morph into an all-or-nothing pressure to be the best player on the team. I would measure my happiness on any given day by how I had performed in the previous game. I remember being despondent after an under-16s grand final because I only scored three points, despite the fact that our team had won easily.

Vesting so much self-worth in my performance led me into a win-at-all-costs mentality and episodes of extremely poor sportsmanship. I had the best game of my life in an under-18s grand final (my last junior game in Mount Gambier), scoring 39 points in a blow-out win over a more fancied opponent. As the clock wound down in the second half and the game was won, however, I spoiled the occasion by mouthing off at members of the other team and the crowd, losing friends in the process. My best and worst basketball moments occurred simultaneously.

After a couple of years off when I first went to university I started playing social basketball in Adelaide. Uni life had chilled me out a little bit and I realised that the volatile tech-foul machine that I had been as a junior was a bad look and robbed the game of its fun. I gradually realised that my level of emotional volatility on the court was directly related to how I was feeling in life off the court. I came to see that if I had an outburst during a game, there was probably something going on in my life that I needed to address.

It was this realisation which led me to make my first appointment with the counselling service at my university. This began a 10+ year long journey, guided by the help of a handful of counsellors and psychologists, into the nature of my anxiety and depression, and their causes. That journey continues today and I can say from that experience that getting help from mental health professionals was the best thing I ever did. It is not easy to ask for help. It is difficult and painful to admit that things are not right. My introspection through basketball helped me to connect the dots and muster the courage to ask for help.

Ben jacking up a three for social basketball team The Rogue Tommies, Adelaide, 2000.

Basketball helped me to become a better leader. As (often) one of the better players on my various teams, I came to see that I had to try to stay calm and set the tone for my teammates by playing hard and leading by example. There is no way I could have written What it feels like to ‘freeze’ on national television if I had not learned this valuable lesson a decade earlier on the basketball court, with a view to setting a positive example for my students.

As I ticked over into my 30s and my body began to decline, my definition of leadership also changed. No longer capable of being the best player on my team, I had to learn how to play a supporting role and do the other intangible things for my team…playing hard defence, setting screens, rebounding, being a good teammate. Even on a social team, that transition was difficult to make, given how central being good at basketball had been to my state of mind.

There is a great irony that someone like me with significant anxiety issues would find myself in sport like basketball which is often characterised by dick-swingin’ machismo. I am tired of the need for competition and the desire to dominate others on the court, because I know the place of profound insecurity from which this desire comes from.

My nationally-televised panic attack and the blog post that followed turned out to be a significant turning point in my life because through that experience I chose to take ownership of my life-long struggle with anxiety and depression. It is a great relief now that everybody knows and I no longer have to expend emotional energy trying to hide it behind layers of social armour. My anxiety will always be there, but now it is just a thing that I have which hopefully no longer owns me as much as it once did. I could not have reached this point in the journey without the game of basketball acting as a mirror reflecting the good and bad of my life right back at me, compelling me to get the help I needed to properly understand my anxiety. 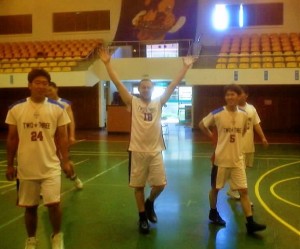 Overall, basketball has been wonderful for me. I have made hundreds of friends through playing basketball in every place that I have lived, in Australia and in Korea and China as well. A team always seemed to materialise when I needed one. Basketball has kept me in reasonable shape over the years and as exercise has been an important palliative for my anxiety. It has been the vehicle through which I have grown as a person and learned about myself and I bet that is an experience that many people can relate to.

Thank you to all my former teammates, coaches, referees, scorers and supporters who have been part of my twenty-five year basketball journey.  And of course my parents, whose encouragement and support were integral to my basketball enterprise.

This first step is the hardest psychological barrier to overcome, but it will be the most beneficial. To start, see your local GP and/or get in contact with Lifeline or Beyond Blue.

If you are at LTU, the La Trobe University Counselling Service (for LTU students and staff) can also be a good first port of call. Other universities and education institutions have their own in-house counselling services.

These websites may also be helpful:

6 responses to “Jam session: Understanding my anxiety through basketball”